Ian Chisholm
Ian is a musician and luthier who makes beautiful guitars and other instruments such as mandolins, bouzoukis and lutes. Ian is based in the village of Ditchling in East Sussex - very handy for me to pop round and see work in progress, particularly as I own several of his instruments. With the help of Stephen Sibbald and myself, Ian hosts a monthly acoustic session in Ditchling. For over 10 years the session was held on the last Sunday evening of the month at the Bull Inn, but the venue moved to the White Horse for the April 2014 session - and remains there for the foreseeable future. 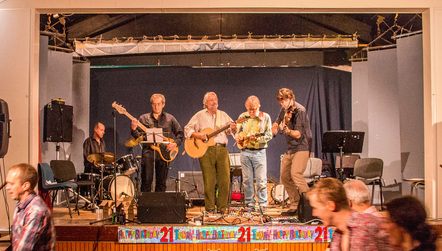 Will & Wolfie - Will Fly & Chris Wolferstan
I play duets with Chris Wolferstan ("Wolfie"), a guitarist from Brighton in Sussex. We play and sing jazz, blues and good-time music. Chris is on the right in the photo, playing my Chisholm mid-jumbo, and I'm plonking away on my Martin. See the "What's On" page for details of our gigs, and check out our Will & Wolfie website.

Ian Gardner
Ian and his wife Jane live in Exeter and it's my pleasure to be able to get down there at least once a year if I can, and spend time playing and singing together. Why, we even manage a little wine and beer from time to time as well... Ian specialises in playing country blues and ragtime - and also writes some bewitching guitar pieces. Ian's on the left in this photo, playing with me at the Bradninch Acoustic Music Club. From the barred F chord I'm playing and Ian's capo on the 5th fret, we were probably playing "Meat Shakin' Woman"!

Nine Pound Catfish
Ian Gardner's new band, formed in the latter part of 2015 - a trio playing in the Exeter and South Devon area - Ian plus Graham Butterfield singing and playing guitars, mandolin and banjo. With Jane Gardner on washboard. They play a mixture of hokum, ragtime, blues and old country music, mainly from the 1920s and 1930s. They currently play at two regular afternoon spots: at the Oystercatcher's Café in Teignmouth on the first Sunday of the month, from 1pm to 3pm; at the Teign House Inn in Christow on the second Sunday of the month, from 3pm to 5pm. Catch them!

Stuart Reed
Stuart was a Brighton-based performer who had a huge repertoire and a magnificent voice to go with it. He sang all kinds of music, from folk to country to old pop standards and played regularly at venues in and around Brighton, and in Sussex generally. I helped Stuart run the Brighton Acoustic Session which is held in the Lord Nelson pub in Trafalgar Street in Brighton on the first Monday of every month. I also used to gig occasionally with Stuart and Chris "Wolfie" Wolferstan at various pubs in Brighton and the surrounding area.

Sadly, Stuart passed away in 2018. He is greatly missed, both as a wonderful performer and as a good friend. 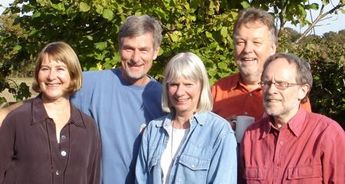 The Twagger Band
Traditional Music with Joy Lewis, Derrick Hughes, Sue Evans, Ian Chisholm and Will Duke. Based in Sussex, the Twaggers play concertinas, dulcimers, bagpipes, whistles, psaltery, keyboard, recorders, bouzouki, mandolin, guitar, serpent and crumhorn. There's a lute and a viola waiting in the wings, not to mention a hurdy gurdy and a didgeridoo but I'm not sure they're allowed out yet! 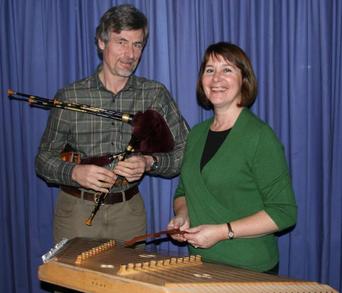 Joy Lewis & Derrick Hughes
Joy Lewis and Derrick Hughes are a popular folk music duo based in Sussex who have been playing together for many years. Between them they play a wide variety of instruments including guitar, smallpipes, hammer dulcimer, bowed psaltery, concertina, harp, serpent and an ever-growing collection of recorders and whistles. They play at weddings, concerts, parties and other social gatherings and also provide musical talks and after-dinner entertainment for many different groups. Whatever the audience, the emphasis is always on entertainment with plenty of humour. 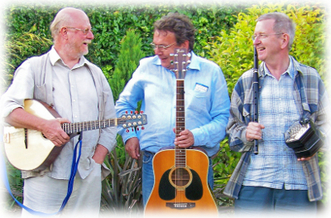 The Rude Mechanicals
The Rude Mechanicals are a Sussex-based multi-instrumental duo/trio (occasionally augmented by musical pals to form larger bands) playing a very wide variety of music. Their material is mostly from the English, European and American folk heritage but often spans other musical traditions. The main duo consists of Barry Ruffell (who often plays with the Unreel Ceilidh Band) and Ray Chandler - augmented occasionally by Jeremy Sherman. They have a regular, weekly evening slot at the Red Lion pub in Shoreham-by-Sea. 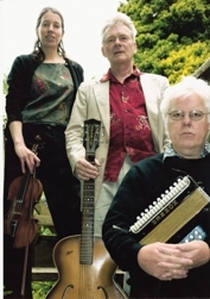 The Boat Band
I worked briefly at Lancaster University in the mid-60s, which was where I met a PhD student who was a keen and knowledgeable blues guitar player. We played together a few times and then I left to live in London. The guitarist's name was Greg Stephens. The Boat Band are Greg Stephens (guitar & tenor banjo), Kate Barfield (fiddle) and Tony Weatherall (melodeon & Cajun accordion). They play a unique mix of traditional British music and Cajun tunes. They regularly cruise by boat around the islands of Scotland, playing music wherever they can, and they have a regular first-Wednesday-of-the-month gig in Penkhull, Stoke-on-Trent.