As a young boy I used to go up the road to my grandparents' house where there were two attractions - a piano and a wind-up gramophone. My grandfather liked "light classics" and my aunt - who was then in her late 'teens - liked Spike Jones! Saturday nights would often end up as a sing-song around the piano. We had no TV in those days and the "wireless" was central to everyone's lives. I can still recall the first time I heard Django Reinhardt on a BBC Sunday afternoon request programme, and I'm sure that's when the guitar first entered my consciousness.

Pre-1956 music was pretty straight. My father, who had been in the Royal Air Force in World War 2, was a huge fan of Glenn Miller, and I can still whistle my way through trumpet solos on "String of Pearls" and all the riffs on "In the Mood". But there is no doubt that the watershed for me - the three records that changed it all for ever - were "Heartbreak Hotel", "Rock around the Clock" and "Bye bye love". Then when I heard British performers like Lonnie Donegan I just had to get a guitar. Eventually, at the age of 20, I bought a cheap one and was off and away. When I started guitar I also learned a little piano and lots of blues harp - I just wanted to play anything and everything! However, the first forum for my amateur efforts was in the 1960s folk scene in the north of England. Eventually, I upgraded guitars, ending up with a 1964 Epiphone Texan sunburst acoustic, in the days when these guitars were still made in Kalamazoo. 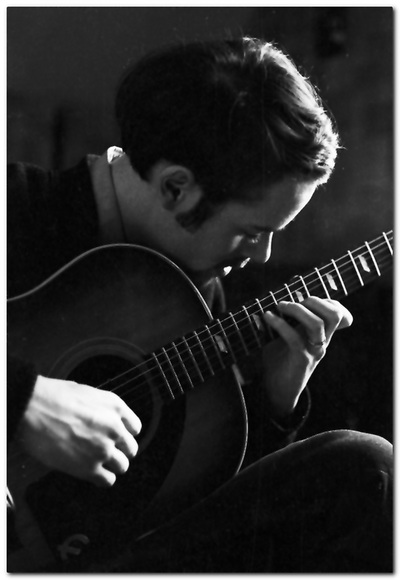 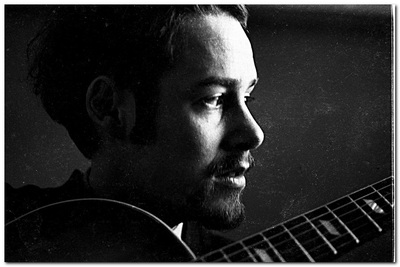 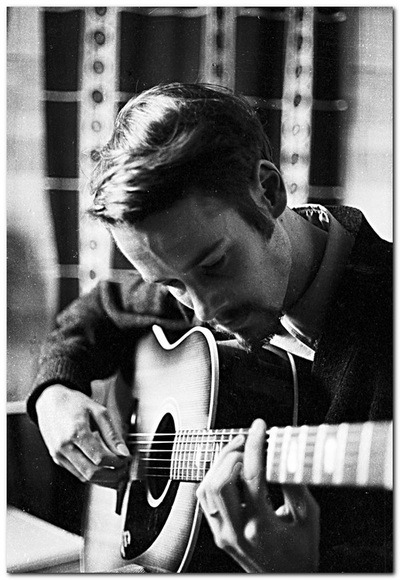 Me with Texan in 1968 - photos by photographer, clarinet player (and best man at my wedding) Barry Marshall.
My first bought albums were of Leadbelly, Sonny Terry & Brownie McGhee, Howling Wolf and other black American blues artists.
London, 1968-1975
When I moved down to London in the late 1960s, I fell into the folk and blues scene in venues such as Les Cousins and Bunjies. My "local heroes" at that time were doyens of the British folk & blues scene such as Davy Graham, Bert Jansch, the Pentangle - and also blues players such as John Mayall, Peter Green and Jo-Ann Kelly. I ran the BBC Folk Club ("Clanfolk") for a year or so, which was held in a Paddington pub called the Marquis of Clanricarde. A mate of mine at the BBC - Bob Wood - recorded some stuff of mine in a basement studio at the Beeb's Maida Vale studios. I played a lot of blues harp in those days - here is a rcecording of me doing my best to sound like Sony Terry...
The Egbert Sousé All Stars
In 1971 some friends and I formed a folk-influenced jug band called The Egbert Sousé All Stars, and we started a weekly residency at The Redan in Queensway, also in London's Bayswater district, which lasted for nearly 5 years. Gradually, our jug band stuff got jazzier and more dance-band orientated. 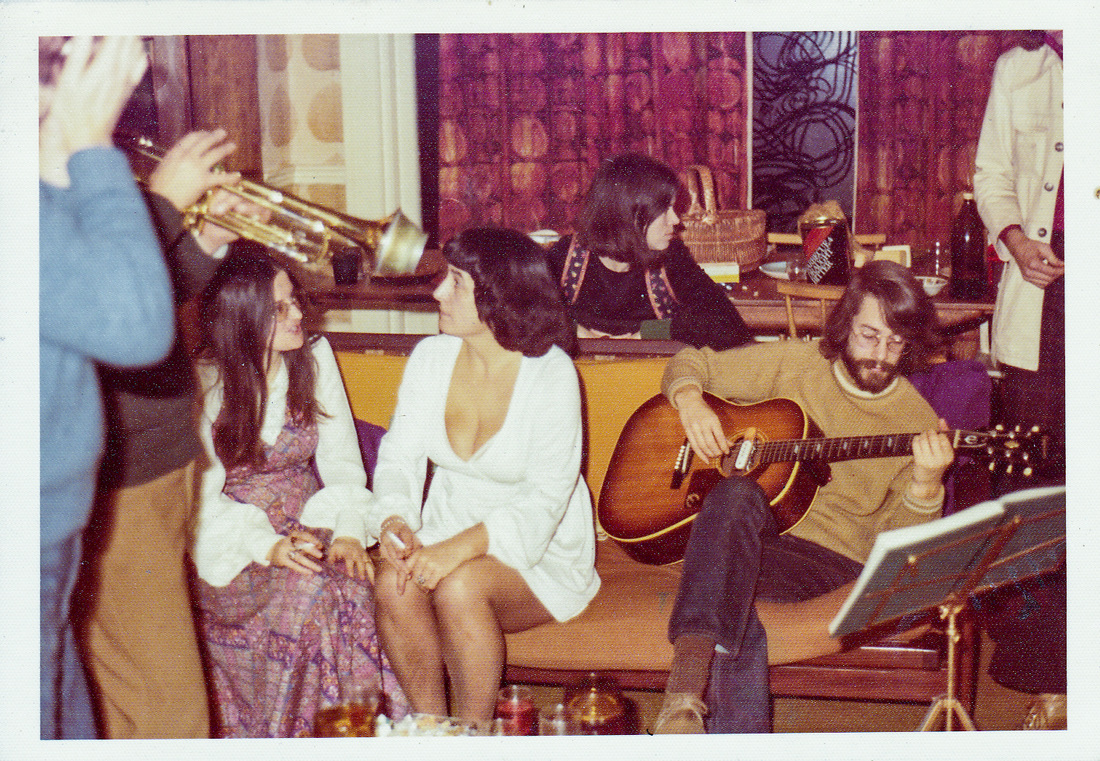 1973 - me and my '64 Epiphone Texan at a party somewhere in London. In the middle of the picture, in the white dress - Rita Foreman, temporarily minus her washboard...
Sussex 1976 -
In 1976 I moved down to the south coast and initially picked up on the folk scene. However my Epiphone was, by this time, amplifed with a DeArmond pickup and I started to get into the mainstream jazz scene. I joined the Brighton-based Jubilee Jazz Band and played jazz and blues on guitar and tenor banjo for around 4 years.
After the Jubilee Jazz Band days, I hooked up with a bass player and a rock'n roll drummer called Raye du-Val. And so I spent the next 12 years playing 1950s rock'n roll in a band called the Rockmates and then the Checkmates - with very little later than 1961 in the repertoire. I laid up the Epiphone and went solid electric, graduating from a Hofner Verithin to a Fender Mustang to a US Strat to a G&L ASAT. All things come to an end in time, and the rock'n roll stuff was no exception.
After a short "rest", I got together with a few kindred souls around 1995 or so, and we formed a band to play the music of New Orleans and Memphis - from Booker T to Dann Penn. That band - the Roadrunners - is still going today, with a regular residency in Brighton, but without me.
I changed guitars, swapped the old Texan for a Martin and acquired a parlour guitar, a tenor guitar, a mandolin, a lap steel guitar and a mid-range jumbo- all made by Ian Chisholm, my old band mate from London days. As well as re-doing my old folk and blues acoustic playing, I now play in a jazz and ragtime duo, and also play guitar with Ian and other good friends in a ceilidh band.  Ian has made me a jazzy, hollow-bodied electric guitar - which is fitted with the identical DeArmond pickup I used on the old Epiphone Texan over 40 years ago. Everything comes full circle in time...  So here's a live track from the ceilidh band - "The Star Above The Garter". 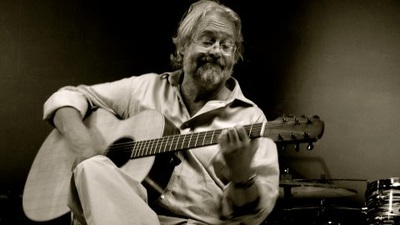 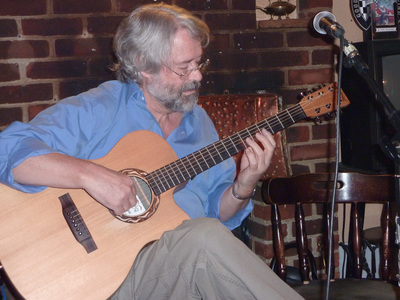 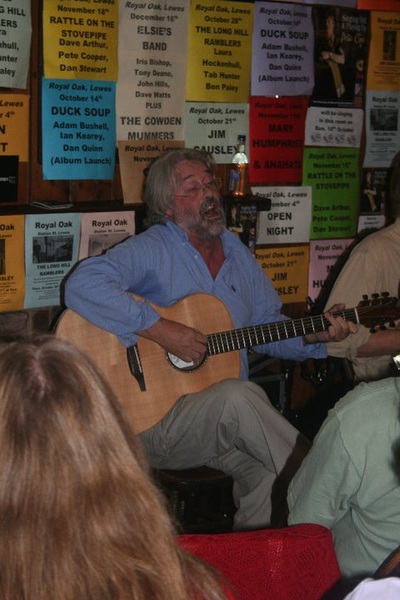 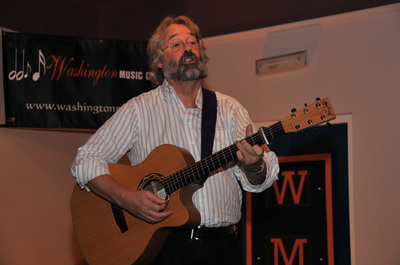 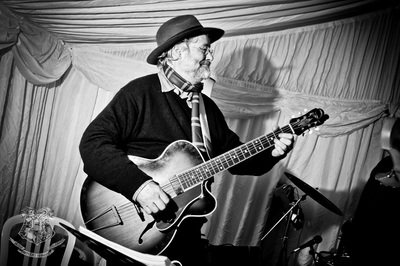 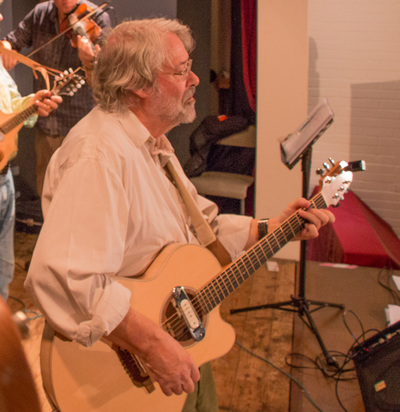 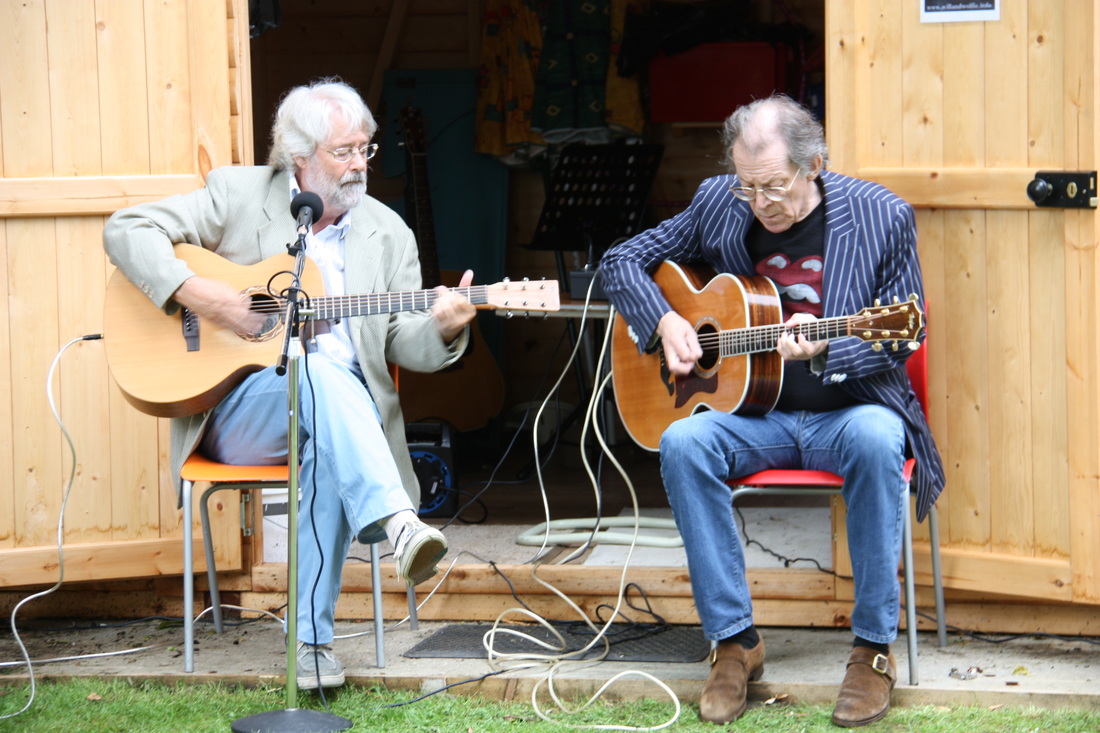 "Will & Wolfie" in action - with my guitar buddy Chris "Wolfie" Wolferstan, in 2016 - and here's a live track from our CD, "By Appointment"...
My latest acquisition is a Lowden O-10c guitar made in 1996. It's a great instrument - with clarity of tone and projection from bass to treble - and wonderful to play. Here's a track of it playing: 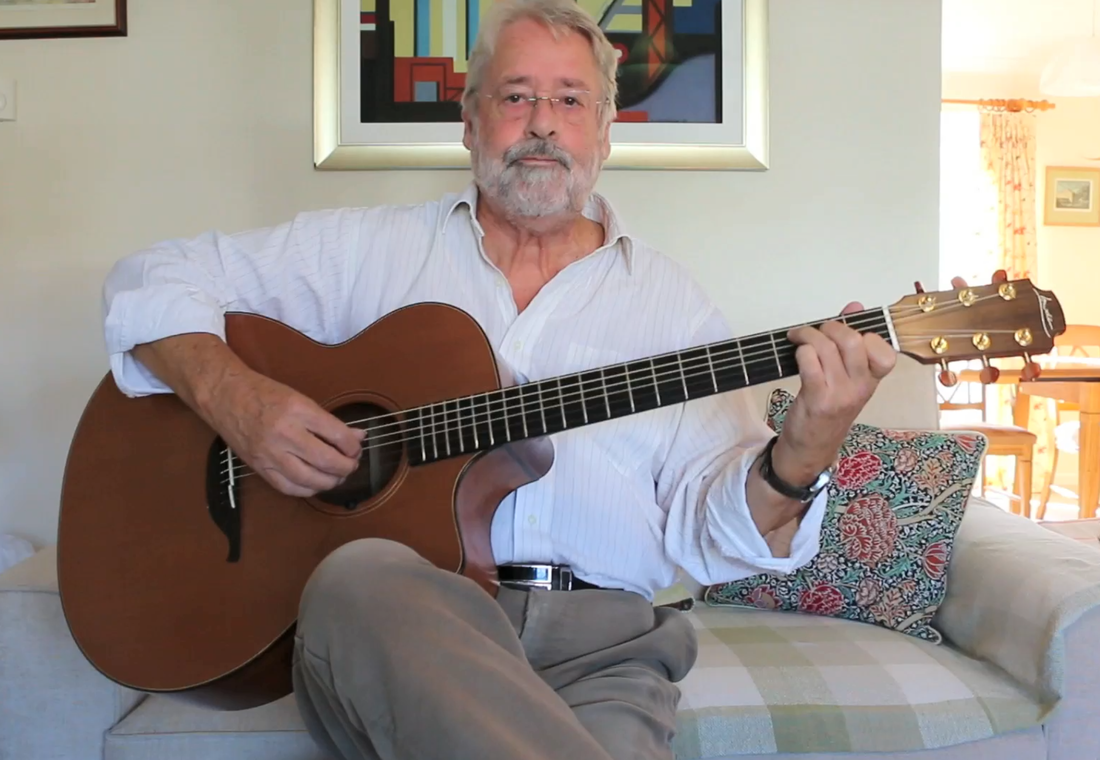